Scrap dealers at the Agbogbloshie market in Accra have fired shots at security personnel who were undertaking a planned decongestion by the Greater Accra Coordinating Council.

A GhanaWeb reporter on the ground confirmed that the exercise on Thusrday, July 1, originally meant to decongest the entire market started smoothly until it got to the section of the scrap dealers.

They started throwing stones at the security personnel who reportedly fired tear gas in a bid to control the crowd.

The state-run Daily Graphic reports that the dealers fired gun shots at the security personnel and set used vehicle tyres ablaze in protest against their removal from the spot.

The subject of decongestion of the Agbogboloshie market had been a mission championed by the regional minister, Henry Quartey, who has vowed to implement a ‘Make Accra Work Again,’ campaign.

Government has since secured a new location at Adjen Kotoku for the onion traders to relocate.

Agbogbloshie onion sellers getting ready to settle at Adjen Kotoku

Trucks, debris, scrap and more scrap but also heavy joint security deployment, this was the ambience at the Agbogbloshie market as the Greater Accra Regional Coordinating Council started a long awaited decongestion exercise.

Under the banner of Regional Minister Henry Quartey’s ‘Make Accra Work Again,’ mission, onion sellers at the famous market were to relocated despite repeated attempts to torpedo the minister’s plans.

The adamant minister insisted that come rain or shine, Thursday July 1 was going to be the day that the traders will have to compulsorily relocate to the new market at Adjen Kotoku.

As part of plans, onion trucks were not going to be allowed beyond Amasaman into the Central Business District.

The market as of today is a beehive of different activities, traders claering their last properties, scavengers looking through the debris and heavy duty trucks and machinery.
Bulldozers pulling down structures and loading them into trucks all in a bid to as the Minister put it, ‘take possession of Agbogbloshie.’

Below are some photos shared via the Minister’s social media handle: 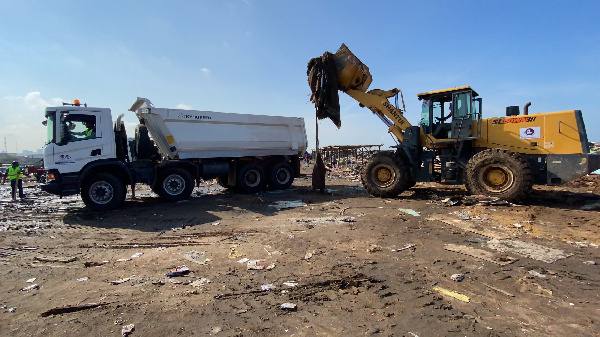 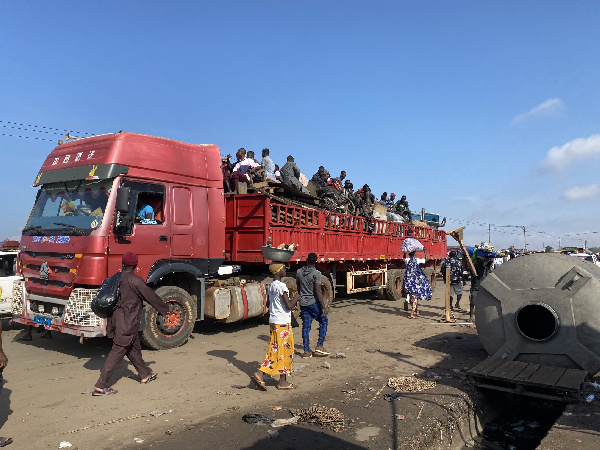 Scene from the ongoing decongestion Exercise at Agbogbloshie #LetsMakeAccraWork pic.twitter.com/AVb78kRNLF