President Nana Addo Dankwa Akufo-Addo has directed the Minister for Interior, Ambrose Dery to conduct a public inquiry into the circumstances that led to the unfortunate incidents at Ejura in the Ashanti region.

A statement signed by the Director of Communications at the Presidency, Eugene Arhin on Wednesday, June 30, 2021, also revealed that the President has given the Interior Minister a 10-day deadline to present to him a report on the violence at Ejura.

“The President of the Republic, Nana Addo Dankwa Akufo-Addo, has instructed the Minister for the Interior, Hon. Ambrose Dery, MP, to conduct, forthwith, a Public Inquiry into the circumstances that led to the unfortunate occurrences of Tuesday, 29th June 2021.”

“The Interior Minister is to provide a detailed report from the Inquiry, with recommendations for appropriate action, within ten days, i.e., by 9th July 2021, to President Akufo-Addo.” 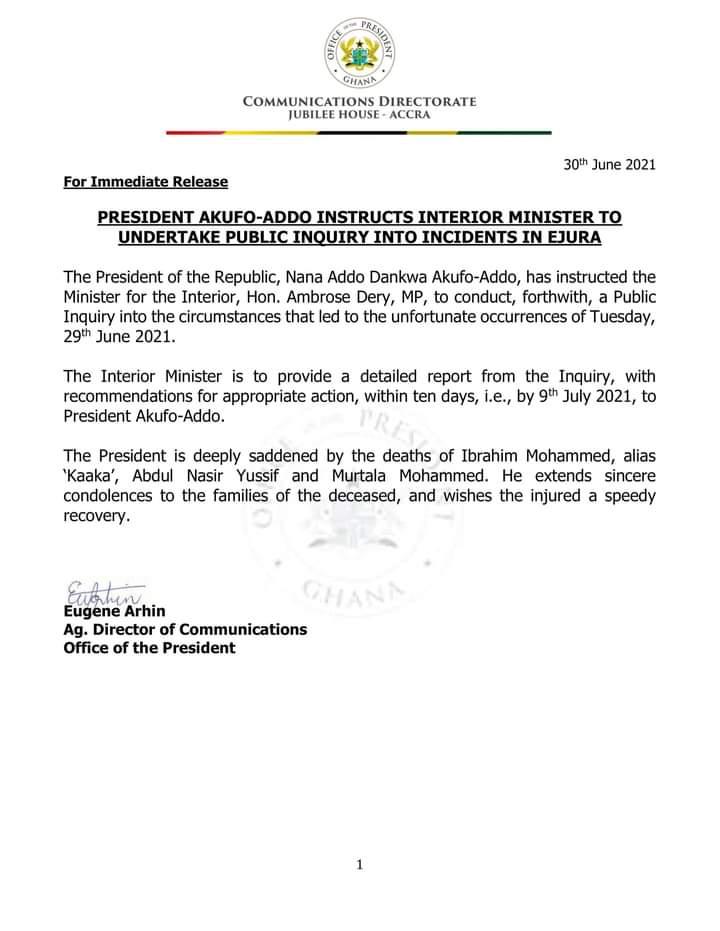 At least two people were shot dead in a clash between Police and protesters at Ejura in the Ashanti region Tuesday afternoon.

Four others are also in critical condition after they were shot by the joint security personnel.

One of the victims, according to the Ejura Government Hospital medical superintendent, was brought in dead to the facility while the other died 10 minutes after arrival.

According to police, witness accounts show that Ibrahim Muhammed was ambushed in front of his house when he was returning home on his motorbike at about 1:30 am on Sunday, 27th June 2021.

He was subsequently rushed to the Komfo Anokye Teaching Hospital in Kumasi where he was put on oxygen until he passed Monday afternoon.

Ibrahim Muhammed was noted to be a known voice on both local and national issues using his Facebook page.

Unconfirmed reports suggest he’s a member of the Economic Fighters League and recently the #FixTheCountry movement.

Earlier threats to his life were reported to the police but no action has yet been taken, reports say.

A statement by the protest group said the Police rather warned the deceased to be cautious of his utterances which were deemed to be making the government unpopular.

CONFIRMED: NDC to embark on ‘A March For Justice’

It has been brought to our notice that the class links sent out are not being received by some of you. It is an error at the Google end and we are trying to get problem resolved at the earliest.

In the meantime you are advised to check your Spam folder as the link, in many cases, reaches there.

“When you go home…tell them of us and say, for your tomorrow, we gave our today!” Epitaph at the Kohima War Cemetry

Kargil Vijay Diwas is observed every year on 26 July to honour the brave soldiers of the Indian army who selflessly laid down their lives to safeguard India’s borders. This year marks the 22nd commemoration of victory at Kargil.

The Indian School observed Kargil Vijay Diwas with a series of activities aimed at remembering the glorious deeds of the martyrs.
Students from class 5 upwards were shown a video documentary of one of the missions undertaken in Chorbat La, the gateway for incursions by
the enemy.

The teachers presented a background of the war with the help of a Power Point presentation. At the end, the students attempted a quiz based on the Kargil war.

The presentations opened the door for a discussion. Many students shared their thoughts and feelings. Their every word paid a rich tribute to the fallen heroes and the sacrifices made by them in the line of duty.

These martyrs shall forever live on in the memories of a grateful nation. Their tales of valour shall inspire generations of young Indians.