The Ghana Police Service has responded to a post by a social media user who alleged that her father was murdered by a team of police officers on Tuesday, June 29, 2021.

A Twitter user by name Real Naa Judith tweeted that ‘hoodlums’ entered her father’s house and murdered him.

The post reads: “29th June, 2021 3pm Broken heart trigger-happy hoodlums parading as Ghana police officers went to my dad’s house, shot & killed him because he had video evidence on his phone on the killing of 4 guys by the police 2months ago!!! I am dumbfounded!WtF is going on in Ghana.”

The post which at the time of this report had been retweeted over 600 times caught the attention of the Ghana Police Service who have offered what could be described as a clarification to the issue.

In a series of tweets, the police said that the visuals shared by the lady were comparable to a crime scene at Ntoaso in the Eastern Region.

“These pictures show a place similar to the place at Ntoaso in the Eastern region where police arrested armed robbers and retrieved several arms and ammunition including about 3000 AK 47 ammunition. This was in the News from the police briefing at the CID on 30th June 2021,” the police tweeted.

The police further questioned the lady about the veracity of her claims and invited her for questioning.

“The man who shot one of the officers was also shot by the Police. Does that mean your father was the armed robber who was shot by police? You @realnaajudith should answer questions from the police,” they added.

It comes at a time when there have been concerns over the conduct of security personnel in the country after two persons were shot in Ejura in the Ashanti Region. 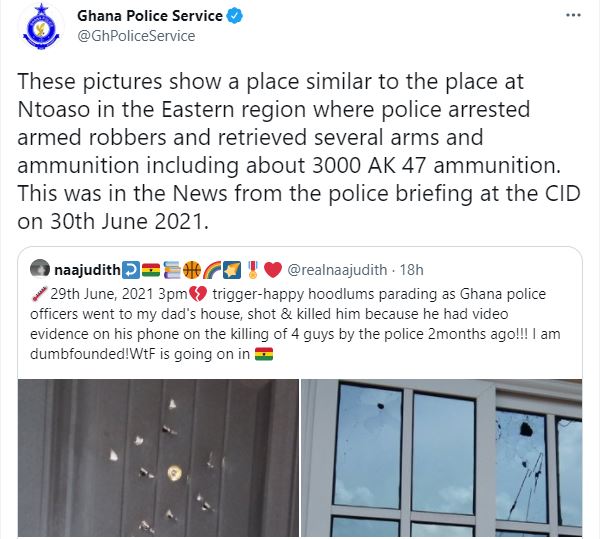