In a rejoinder sighted by GhanaWeb, Ogyeedom Kwesi Atta VI said he has neither met the Chief Justice nor engaged him in any way.

“I unequivocally deny all allegations of intended bribery or actual bribery against any judge including the Chief Justice whom I have never met or known personally apart from seeing him in distance from the bench,” the rejoinder said in part.

“I have since applied for a copy of the said response to my petition against Lawyer Afrifa in which those fabrications and allegations are said to be contained and will appropriately react to the General Legal Council upon receipt of same.”

The development comes after Ogyeedom Obranu Kwesi Atta VI petitioned the General Legal Council over the conduct of one lawyer Akwasi Afrifa.

A copy of the petition which was filed back in March this year, sighted by GhanaWeb, said lawyer Afrifa who was consulted to take up a case which is pending before the Supreme Court for the complainant, sought to take money from the petitioner to do some ‘gymnastics’ on the case.

Ogyeedom Obranu Kwesi Atta VI pointed that Afrifa who was engaged to handle a case at the Court of Appeal, Cape Coast was paid in full on an agreed sum of GH¢300,000 but later suggested to him [Ogyeedom] to make some funds available for what he termed as ‘ways and means’.

“In the course of handling the case, he [Lawyer Akwasi Afrifa] suggested to me that it was in my interest, beside his fully paid-up fees to provide an amount of one hundred thousand dollars (US$100,000) to enable him do some ways and means (gymnastics) on my case so that we can obtain a favourable decision,” the petition read in part.

In response, however, Kwasi Afrifa denied the claim. He alleged that Ogyeedom rather told him his friends had suggested that they could influence the Chief Justice with an amount of money.

“At the end of July 2020, the Petitioner informed me that friends of his who were highly connected politically had taken him to see the Chief Justice who had agreed to help him win his case on condition that he drops my goodself as the lawyer handling the case for him and engage Akoto Ampaw Esq in my stead,” Kwasi Afrifa said.

“He further informed me that the Chief Justice had demanded a bribe of US$5,000,000 for a successful outcome to his case and that he had already paid US$500,000 to the Chief Justice. He further indicated that he was hard-pressed to raise the remainder of the US$5,000,000 and so I should refund some of the GH¢300,000 paid me as fees because he had in line with the advice of the Chief Justice, engaged Akoto Ampaw Esq as solicitor to continue the case before the Supreme Court,” Afrifa added.

Moments after the GhanaWeb publication, Ogyeedom Obranu Kwesi Atta VI in a brief statement said he has never encountered the Chief Justice.

See the rejoinder below: 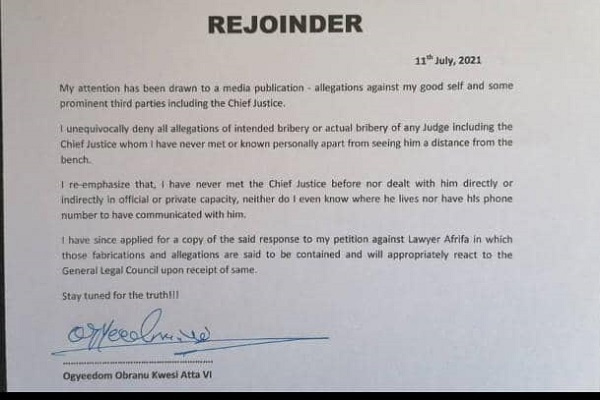